In the mid 1960’s with the rapid growth of Cumberland County moving westward to South Middleton, the township supervisors appointed a municipal authority, which was formally incorporated on April 3, 1969.

In 1972, well no.1 located across from Vitro (formerly PPG) began production, serving the Vitro plant and about 30 additional customers.

In 1985, well no.3, located southwest of Carlisle on Rockledge Drive, across from the Forest Meadows development, began operation.

As of December 31, 2020, the water system serving South Middleton Township consists of: 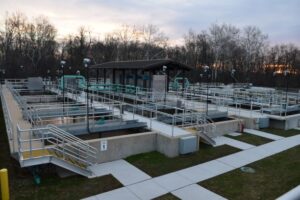 The wastewater treatment plant is located on the Yellow Breeches Stream, East of Boiling Springs, at 345 Lear Lane.

The plant began operation on July 20, 1977, was upgraded in 2016, and is of the Integrated Fixed-film Activated Sludge (IFAS) type with aerobic digestion of biosolids.

The original plant has a permitted capacity of .75 MGD (Million Gallons per Day), which was increased to 1.5 MGD in 2016.